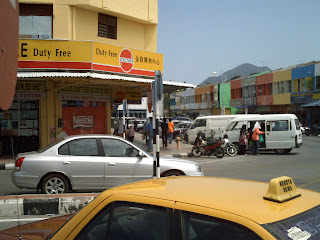 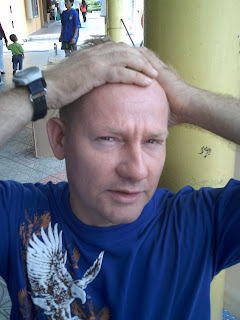 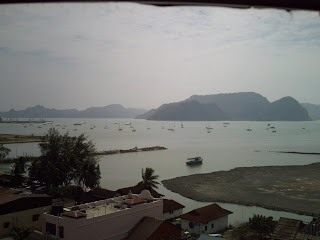 Yesterday, walked to the local modern and air-conditionned shopping center with the French-Canadian couple: Guillaume and Marie-Eve. Then through a park, and discovered a local beach. had a swim while the imam at the local mosque gave a rather haranging speech which u could hear. Evening, eat at restaurant - 4 dollars for a good meal.
Malaysians are a very varied bunch, some women wear headscarfs, other don't. Interestingly, adverts, even those put out by the govmt, rarely feature women with headscarfs. 52 % muslim, the indians, chinese, and indigenous malays. conquered by the Portuguese, the dutch and finally the British in 1790 or so. Now a constitutional monarchy. Lots of foreign films on TV, so there seems to be little censorship.
People are friendly , especially if you speak a few words of Malay - they like you for making the effort.

Took a few pictures with the digital camera, which I will attempt to put on this blog. The town I'm in is Kuah, on the south side of Langkawi island, itself on the border with Thailand (west malaysia). Surrounded by 100 or so islands of varying size... so often no surf. weather is warm, but with cool breeze. Until 3 months or so, when the wet season arrives and it will be very humid.
Lots of electronic goods and such, as the whole of the island is duty-free.
Yikes, using this blog site is easy ! took me 5 minutes to create the blog site. After that, editing is similar to using word (simpler). Just google "blogspot.com" to create your own.
Posted by Jules at 10:49 PM