On Camp with Sara 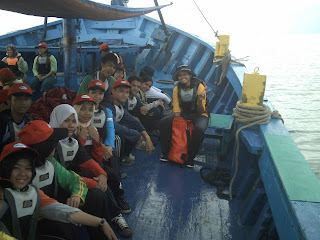 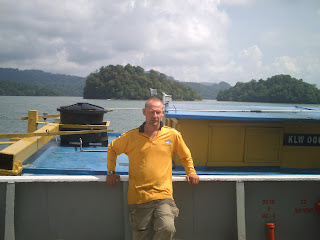 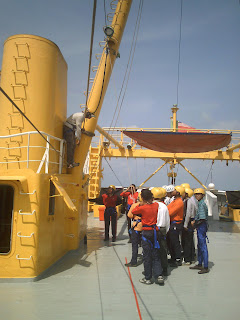 photos: The kids, and Sara my co-trainer, on the ship to the reef explorer (RE);
Myself on the RE;
The kids doing high ropes on the RE.
(click on a photo to enlarge)
Last week, I was on camp with Sara. Had a cheerful bunch of 16yr old kids. One interesting kid, David, chinese Malay, asked me lots of questions about how to choose a career , money versus interests and so on. He said something which should be heard more often in Oz, and the west in general:
"I am always interested in talking to westerners - I'm from a small village, and I beleive they are superior physically, mentally and socially"....
He asked me if I did not consider it a waste of study to have studied engineering, and then end up being an outdoor instructor. I explained that there are many ex-engineers, including "Cham", who worked several years in the UK, who work at WC. And I went on to try and explain that following your heart, or true vocation, is more important, in the end than following what convention advocates. In the end you will only be succesful in an endeavour if it is your choice. He said that there is a saying in Malaysia: "no money: no talk", and earning a high salary is the greatest priority. I said that money is important, but watch out with making it your only priority.
I gave the example of Britney Spears, who is a multi-millionaire, can have sex with any guy she chooses , but has gone into rehab after problems with bulimia and drugs. Just goes to show, we all need meaning in our lives - sex and money alone won't satisfy us.

One night - we did a "star session" - where we point out constellations, stars amd planets like Venus (the brightest). I ended up on a real roll, talking about how stars can become black holes, how even light is sucked into a black hole, so great is the gravity. And that the idea that light has a mass was introduced by Einstein, and then verified experimentally in the 50s, if I remember rightly, by two physicists who pointed a telescope ast two neighbouring stars when a planet came between them, and witnessed that the stars appeared to come closer together for a time - ie the planet was bending the rays light slightly as they went past it. Then went on to talk about protons, neutrons, fusion reactions going on inside the sun. And how experimental fusion has been obtained in a UK laboratory (JET). using superconducting magnets to maintain the plasma that is created when you fuse hydrogen atoms together.

The US, Europe and Japan are building the first Fusion power station, due to come on line about 2025 or so. Fusion power can use sea water as a raw material, and can produce huge amounts of energy quite cheaply. By mid century, we will have unlimited virtually free electricity, I reckon. Kind of a counter to the doom and gloom issued by the greens, who's judgement I do not trust at all.
past green doom scenarios: by the 90's , we will have no more oil (Jimmy Carter);
By the 80s, there will be 60 million starving americans (Paul Erlich in the 70s on food scarcity).
I also remember a new Ice Age being predicted in the late 70s..
So lighten up, Greens - the earth will change weather patterns, have tsunamis and so on, even if the entire human race dissapeared - in my opinion.
Posted by Jules at 11:29 PM

Julian, there's no doubt your students are getting the broadest possible education from you, touching on a huge range of topics!