A visit to an Backyard Astronomy dome 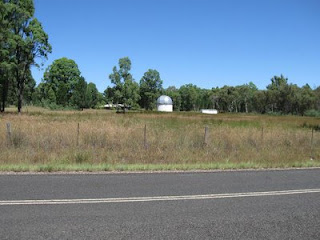 above: one of the backyard telescope domes near the town. (not the one I visited).

Monday 16 march, I drive along small country road which leads to the Warrumbungles, and stop at a guy’s property. He’s the ex-director of the Anglo-Australian observatory, and has several telescopes in his garden, including one big one in a dome. He is now an entrepreneur – giving talks in the evening (to myself and 3 others, tonight), to school groups etc. Pretty fascinating to be in the presence of such encyclopaedic knowledge of Physics and Astronomy, made fun by the ability to look at huge nebulae (gaseous clouds), galaxies, planets, stars thru his equipment. $15 for nearly 2 hours of lecture and viewing.

He has a small dome, which he has set up for remote viewing by a fellow in Scotland. The Scottish fella operates it via the internet when he wants to (!)

He projects a film about scale using his laptop, and then shows us the night sky,
He gives us lots of facts, pointing out constellations, the Magellan clouds (nearby galaxies), facts about the size and distance away of stars. And we observe some thru his 3 telescopes. I take notes for my own interest, and so I can share some of the wonder of starscapes with the students in 2 weeks.
Near Orion’s belt (3 stars in a row), there is a reddish star called Betelgeuse, which is a ”red giant”, you can see with the naked eye. Meaning it is a dying star, and could explode and become a Supernova at any time. What we see with our eyes actually occurred many thousands of years into the past, however, as it has taken many light years for its light to reach us. When it does become a Supernova, it will be brighter than anything else in the sky for a month or so, lighting up our nights…. Spectacular.

Just having a little knowledge of astronomy is mind-boggling, and is awe-inspiring when you consider the scale of the universe, of which our galaxy – the milky way – is just one of trillions of galaxies… Also the fact that light travels at a finite speed is hard to imagine, as are other facts of Physics.

Oh that Science could be taught this way – by going to factories, observatories, power stations, talking with bike designers , and going “backwards” as it were to the theory, rather than teaching disconnected theory in the classroom to mostly bored students. In fact the whole secondary/tertiary school system could be outsourced to a multitude of small inspiring operators like this guy, combined with self-study using the Internet. The head of Noosa Sunshine coast uni suggested as much, mentioning the Internet as a new means of learning.

This guy really inspired me, with the facts about the night sky, his interest, as well as his entrepreneurial small-scale business, which he runs out of his front garden.
Posted by Jules at 10:46 PM

Wow, that's amazing! I never knew such private setups existed. You are so lucky to have experienced all that. When I was a kid one of my favourite school outings - probably my absolute favourite - was a visit to the Planetarium.

Cool... That experience must have really made you wonder about the extent of the universe et al., a subject that has always fascinated me...