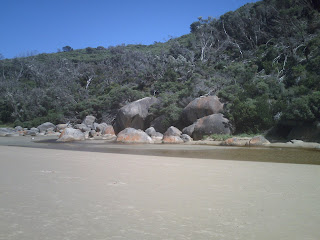 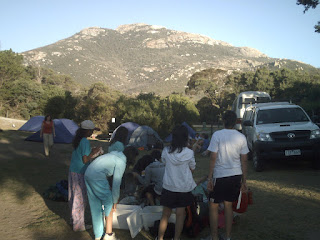 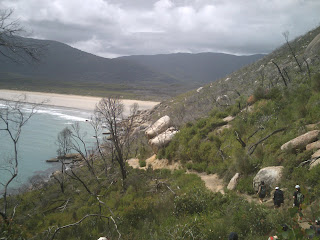 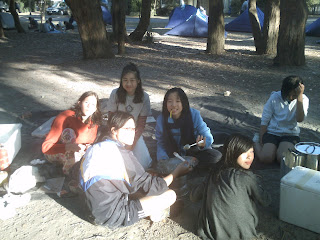 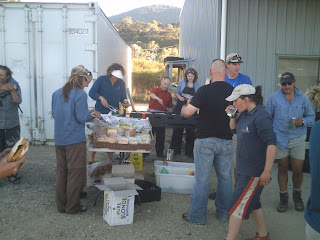 last photo:
OEG HQ at Eildon, Vic.
Been pretty busy since Feb, doing camps one after another, mostly center-based ones (little or no walking and no camping).

I was flown down to Victoria a few weeks ago for an OEG program of 5 days for PLC (Presbyterian Girls College). Flown out the day after the end of prog. – so sorry guys in Melb, couldn’t visit you…

Anyway it was quite a novel experience working for OEG which is huge and has 80% of the Vic. Private school market. There were 130 OEG instructors working that week, in several different parts of Vic. Including several flown down from Coefficient in Brisbane.
The Base camp of OEG is at Eildon, and there’s quite an atmosphere with a huge warehouse full of food and gear, staff accommodation nearby, and staff from overseas. On the last day, everyone is driven back to Eildon, u unpack and there is a free BBQ and beer.
I happened to bump into Selena, with whom I had worked with in Malaysia, which was nice.

The start of the program was a bit exhausting – getting used to all the gear and procedures that OEG uses. And the girls were rich girls – extremely, and annoyingly, chatty. And some were very silly or spoilt. I improved as the days went on, but things would have gone smoother if I had divided the large group up into small groups of kids and rotated them every day between:
Cooking, Cleaning, Leaders.
This method was used in Malaysia, but I thought I’d let the group organise themselves – which usually meant the same people did most of the work....

So I’ll know for next time. Avoids calling for volunteers to clean up – it’s just the cleaning group of the day’s responsibility.

There were times when I thought: “I’m not meant for this job”….
Thanks to the difficulty of getting the group moving, the silliness of the girls, and not a very cooperative or fit teacher.
Certainly, I would prefer true wilderness camping – something like mt Barney in August 07, or wilder again – 20 days in Alaska, with a fit and cooperative teacher…mmmm
We were in camping grounds and Nat.park campgrounds … easier to organize for OEG, but much less of a learning exp. For the kids.

We did have lovely debreifs under the stars on the beach, and sunsets.
I have pasted some of my debrief notes – which I write for myself after camps, below:

teacher acting a bit like client on paid tour
difficult to be tour guide to teacher and taskmaster to kids…
argumentative re start times – while I gave briefs..
: oh, cant we get up later….

A bit “lordy” , physically not fit.
Bad of hearing ? saying: what ?? in a shockish manner when I spoke
Annoying behaviour sometimes – eg taking shower late and being 45 min late for debrief …

Teacher Interviewed by David (standard procedure);
She had some –ge feedback on me, re my relation with her, being too hard on the girls… (mmm - I’m not here to be their bestest friend, as she was trying to be).
But also some positive – my astronomy session was good.
She lied a bit,… saying debriefs on beach cold… when she had said: “lets go to the beach” on the last nite….
David: Good that I did debriefs – essential part of camp

Girls annoyingly chatty – rich kids thing. Annoying to have to remind them often to work, not chat.

brief leaders nite before/ morning and get them to brief group.
Write list of names&groups on day1 then Rotate . keep list secure !

Do trangia demo for whole group ?

Felt this was not my cup of tea on day1…. Girls too noisy, late dinner, difficult to get canoes back on trailer…
Got better after.

Up at 550, put on hot water for group milo on last day… good idea
My fitness- good : could run to get info and not be out of breath.
Back – lower sore to begin, got better with pack massage.
Worse was – trapezius tension, neck pain. – tension…. Other guy Julian also gets trapezius pain.

Altered state of concsiouness. When listen to MP3 player fri nite – tired… so that brain slow, and normal parasitcal thoughts not there… feel almost disembodied as I listen to randomly selected tunes. Listen late into the nite.

Come back to Noosa, like an old friend - go to beach Sunday. Feel a bit tired, but in a good way – better than after center-based stuff – I have burnt myself completely in the work – so there is nothing left to burn. This is a good feeling.

Would be good to do several OEG progs, and become master at it… like in Malaysia. Hardest part – group manage. Helped by making groups with: leader,cooking etc. also teacher manage.

My nav was good on last day – copied topo map from penny. And used initiative to go around beach and not use inland track.

Very interesting to be at OEG HQ and meet people from USA, etc..
And to talk to Jenny – very outdoorsy woman re NZ mountaineering, nepal daulaghiri .
She said – just go to NZ, don’t put it off.

I remember looking at their website back in 1998 and considering flying over to do a course of some kind.
Like Their whole attitude of being in wilderness – away from showers, roads… for extended period.
3 week program costly – but parents less taxed than in aus – can afford it. Very American situation – you pay the true cost, get good quality, and with some work, you can afford to get good quality, as you can make money by taking on as much work as you want and keep most of the earnings. The US scouts and others organize no-cost camps.
Posted by Jules at 3:30 AM