Summary of my Para course 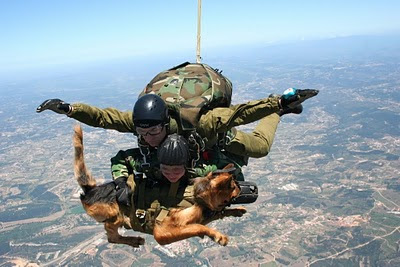 1. Portuguese paras. They are doing free fall - the chute hasn't been pulled yet. The dog is also a paratrooper...
2. German paras
3, The wings
I'm back in Holsworthy barracks, after 3 weeks of Para course down in Nowra.
the first 2 weeks were ground training - intensive days of fall training, flight training hanging from the ceiling in harnesses, learning to maneuver the chute and emergency procedures, and aircraft drills in mock aircraft.
the fall training involved practicing falling feet together, sideways on judo mats: bend, fall, roll over feet together. So that the calf hits the ground, followed by thigh, then shoulder - ideally you turn away the shoulder a bit so that the meaty part of the shoulder hits the ground. We also used a trapeze type of swing to get a bit of momentum. On the last day, we spent the whole day outside, on the "fall Tower" and the "exit tower". On the first , you get hauled up diagonally on a wire up to 30m. you do your parachute manoevers, then you are lowered fairly fast, but not as fast as a real fall. You need to land feet together and ideally, roll .
the other tower was like a flying fox - we queued in groups of 3 and jumped out, just like in the plsane, we then did out drills as we went down the wire , almost horizontally. Good practice for the aircraft exit, which is mentally the hardest part...
On our first jump, some guys' legs were trembling as they waited to exit, but they still did it --- that's good courage. I was more zen than many, as I'm used to working at heights - running flying foxes for kids from a tiny platform on a tree, etc.
Still, we were all pretty silent and concentrated for the first jump. subsequent jumps were easier, but there is always some trepidation. chute malfunctions have been known to occur - in which case you have a few seconds to pull the reserve and deploy it.
last week, we did 6 jumps over 4 days. with 1 day of bad weather . 2 jumps per day.
Hercules Jump
the last day, we did 2 jumps from a Hercules transport plane. A big noisy powerful thing, like being in a cathedral inside. we jumped out of a side door this time. And as soon as you're out, you get whipped sideways by the slipstream . You see the aircraft go past , feel yourself rotating a bit, then the chute deploys and you enjoy the glide, which is always a great experience.
the first jump was with CE (combat equipment) we had a big pack hooked onto our front, under the reserve. 25 kg or so. As well as webbing around the waist, and the rifle in a pouch strapped to one's side so it won't move when you land.
When you get to 60m off the ground, you pull a strap and the whole thing releases and hangs on a 5 m nylon cord. Later, the pack lands and soon after, you land. This way, you have all the gear you need close at hand. You hobble along with all this gear and are relieved to jump , so that you don't have to stand up against the weight...
The second jump was at night, cleanskin (just the chute on yr back). It went well, and it was an experience to land on a field illuminated with glowsticks. I did good manoevers to slow down drift and did my best landing so far, with a good roll. At the end of the course, about 5 people were limping, some on crutches. Landings are the tricky bit.. as you come in at 4.5 to 6m/second, and must have feet together or breaks/strains are likely.
We had a small ceremony and were given our "wings". Very proud to be part of the Para community.
Posted by Jules at 12:58 AM

I do not know if I have found the right guy, but your blog post on paratroopers and army life reminded me of my recently deceased brother, Mr. Eng Wu ONG (better known as "Egg"). Egg was a member of the Melbourne University Mountaineering Club (MUMC) who died in a mountain-climbing incident on 15 December 2010 while holidaying in New Zealand.

In the months before he went on holiday to New Zealand for the last time, he had mentioned to me that he met a lawyer on one of his climbing holidays. I would like to know if you are that lawyer he spoke of. There is an article on ice-climbing in the August 2010 edition of MUMC's magazine by Egg and a Julian PALSTRA, and the article talks about the ice-climbing that they did while in New Zealand during July 2010.

If you would like to get in touch with me for more details, please reply to this blog comment. I have set follow-up comments to be e-mailed to my GMail e-mail address.

Dear Eng,
I just read your comment... what a surprise.
I am terribly sad for your loss, and I feel it myself. GOd bless him, yes I did go ice climbing with him in July 2010. He was a competent and friendly companion. His life was cut short, but doing something he had pursued with strong will and a passion.

you can email me on jupal78@yahoo.com
I would like to have a chat with you.

Amazing photo of the dog paratrooper. What an incredible animal!
Sorry to hear about the loss of your climbing partner, Jules.