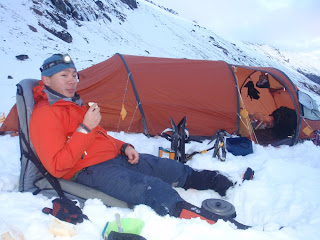 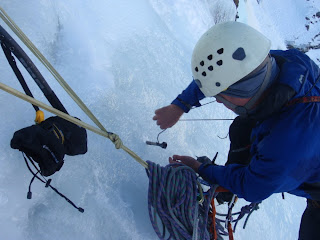 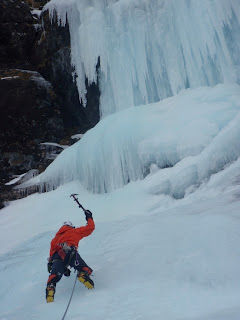 Hi there... back to my blog after a bit of a hiatus, where I used mostly facebook..
but I think I prefer the more diary-like and deeper format of a blog.
anyways, here's a link to my picassa photos of ice climbing in NZ in June 2010.
https://picasaweb.google.com/105767598484864553657/NZIceClimbingJuly2010?authkey=Gv1sRgCJqZi-SSypfl-AE#
There's definitely something about mountaineering that hits a chord deep inside me. The grandiose, awe-inspiring towering mountains, the unforgiving nature of mountaineering, the sweeping views you get, the focus you need just to survive. I become very focused and quite effective. Pity I do not live closer to some real alpine terrain.
We had a bit of an epic time exiting the valley - instead of going back over the mountain pass (steep at first but then easy), we choose to walk down the valley to the road. 8 hours later we had not quite reached the tree line, where snow is replaced by a forest track. So we had to bivouac.... and I had a plane to catch the next day.. But we did get out to the road the next day, and hitched to Queenstown. All because of crusty snow, which meant we kept on falling thru the snow (even myself with snowshoes) and had to haul ourselves out. exhausting with huge packs full of climbing gear.
First time mountaineering since I left France in 2005 though... and it came back quickly. Also I got some good huge mitts , a snow spade etc at a discount, as NZ is 20% cheaper for aussies due to the exchange rate.
Well... I just got a bit of a shock and shed a tear for my climbing partner Egg... I found out just today from his brother:
Eng Wu ONG (better known as "Egg"). Egg was a member of the Melbourne University Mountaineering Club (MUMC) who died in a mountain-climbing incident on 15 December 2010 while holidaying in New Zealand.
He's the first partner of mine who has died in the mountains.. but some famous mountaineers have 15 or more friends who have died - such is the nature of mountains, and mountaineering at high levels.
God bless you Egg. You had come to NZ several times , had done mountaineering courses... You could have just had a humdrum life like so many people living in the oppulent west.
Posted by Jules at 3:46 AM